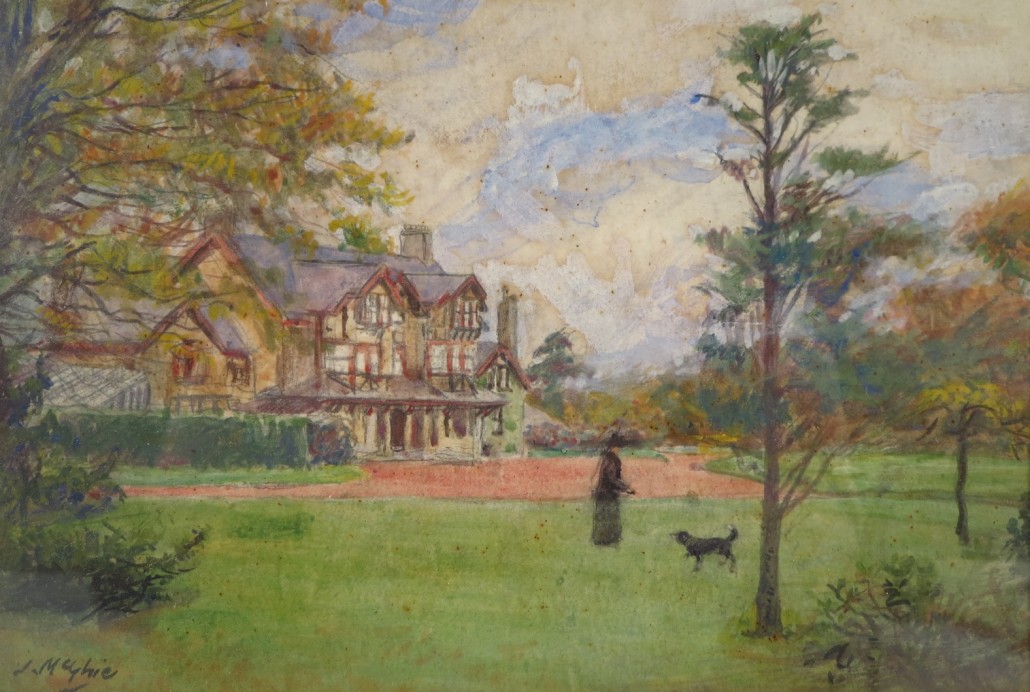 LITCHFIELD, Conn. – Beloved comedian, philanthropist, designer and global businesswoman Joan Rivers was known for her exquisite taste in fashion and interior decor. As the recent, highly successful Christie’s estate auction of her fine and decorative art collection revealed, Rivers appreciated quality and consistently bought the best of every category.

While many pieces in the Manhattan auction sold for prices beyond the reach of the average buyer, another opportunity awaits on July 20-21 to acquire beautiful furniture, decorative art, jewelry, silver and artworks from the Rivers estate, but at more accessible price points. Litchfield County Auctions will host the approximately 600-lot, no-reserve sale at their gallery, with absentee, phone and Internet live bidding available for those who cannot attend in person. All items are from Rivers’ Connecticut country estate or New York apartment.

The Wednesday session will be devoted to fine and decorative art, while Thursday’s lineup features Rivers’ wonderful collection of jewelry and accessories. A portion of the auction proceeds will benefit Guide Dogs For The Blind, and God’s Love We Deliver.

All of the auction goods were personally owned by Joan Rivers, and some were family heirlooms. “These are the items my mother used and loved and lived with in her country house,” said her daughter, Melissa Rivers. “I am pleased to know that fans will have a chance at owning a piece of her legacy.” 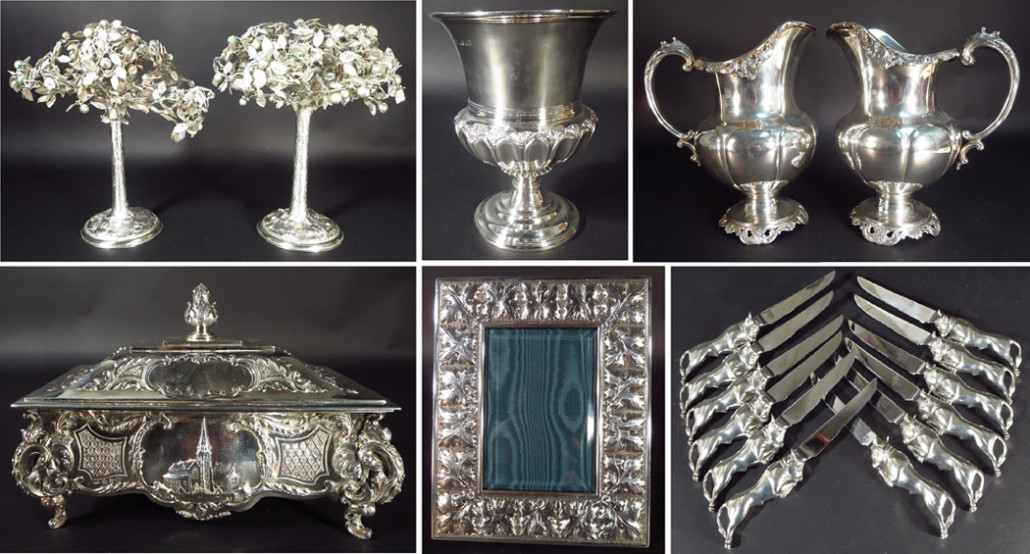 Selection of fine American, English and Continental silver from the residences of Joan Rivers

Until 2013, Rivers owned a rambling 76-acre estate on New Preston Hill Road in New Milford, near the gallery where the auction will take place. She was active in the community and frequently attended events and social affairs around Litchfield County, whose towns are regarded as the Hamptons of Connecticut.

Every item chosen for her breathtaking residences had to have Joan’s stamp of approval before entering the front door, so even though there may be bargains available on July 20 and 21, Rivers’ discerning eye and uncompromising attention to detail will be evident in each auction lot.

The artworks in Rivers’ Connecticut residence crossed many genres. For example, a circa-1940 impressionistic landscape painting of tree-studded mountainous terrain added European flavor, while an antique print of hunting dogs titled American Field Sports was right at home in a library setting. Another perfect selection for a country home was the mixed-media John McGhie (Scottish, 1867-1952) depiction of a woman with a black dog (see top of page), ex Christie’s, which is entered with a $400-$600 estimate. 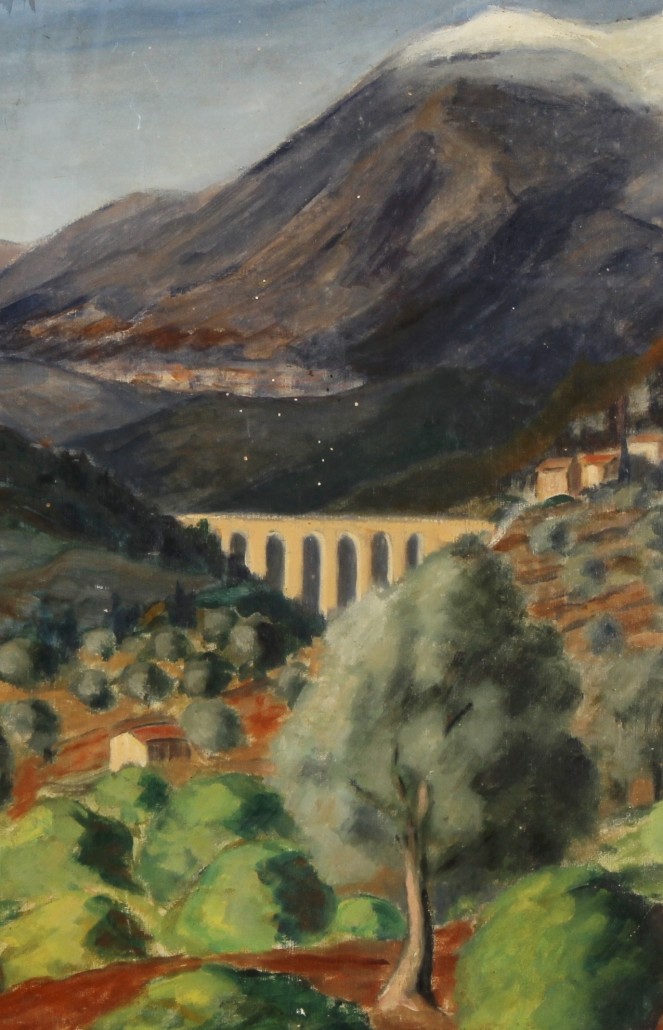 Rivers’ appreciation for English and Continental antiques was well known. She chose for her country home traditional pieces such as a circa-1790 George III mahogany stick barometer by John Rissell, Falkirk (shown below), estimated at $3,000-$5,000. A mother-of-pearl desk set with inkwell and locking box, with Christie’s provenance, are expected to sell for $500-$800. 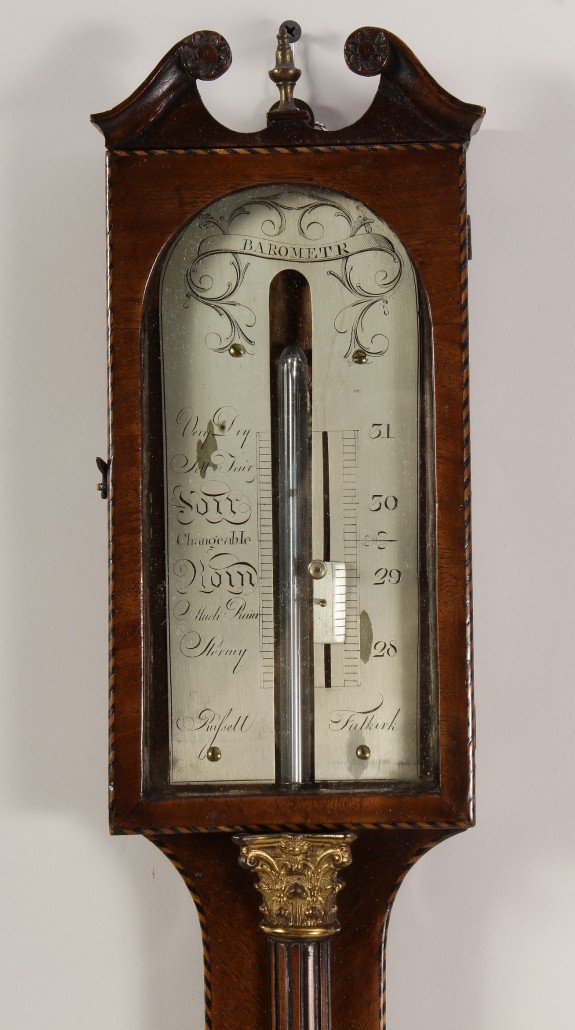 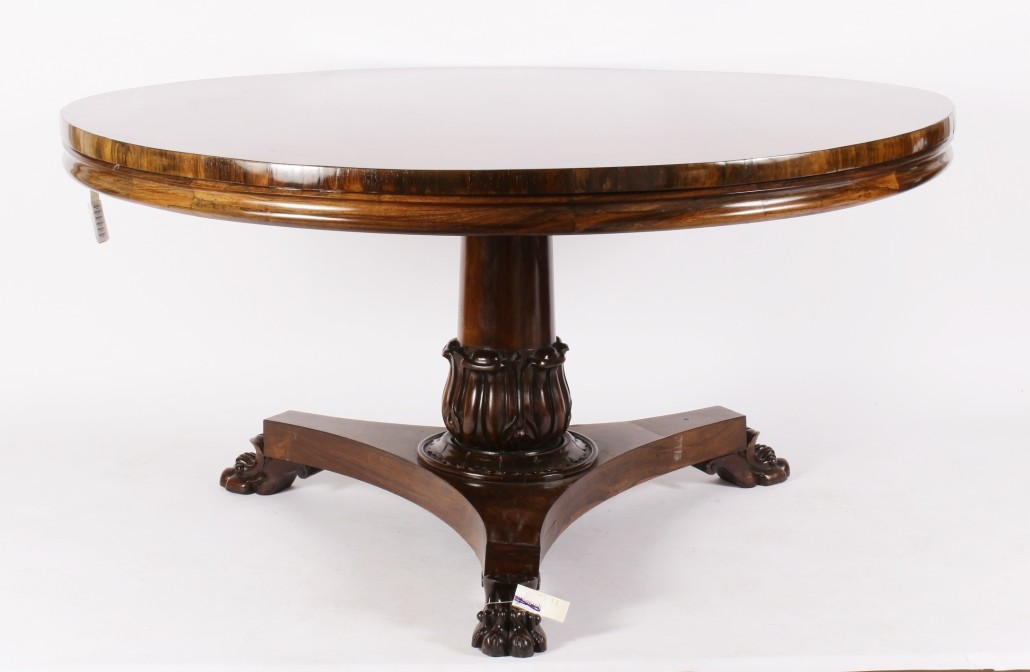 Who knows which celebrity guests in the Rivers home might have lounged in the green velvet upholstered mahogany open armchair, or French Provincial-style chair with striped upholstery? Each is estimated at only $200-$300. Joan’s penchant for unexpected but unfailingly chic color choices in her furnishings is epitomized by the low bench upholstered in cerise and ivory, with lime-green bolsters. Estimate: $600-$900. 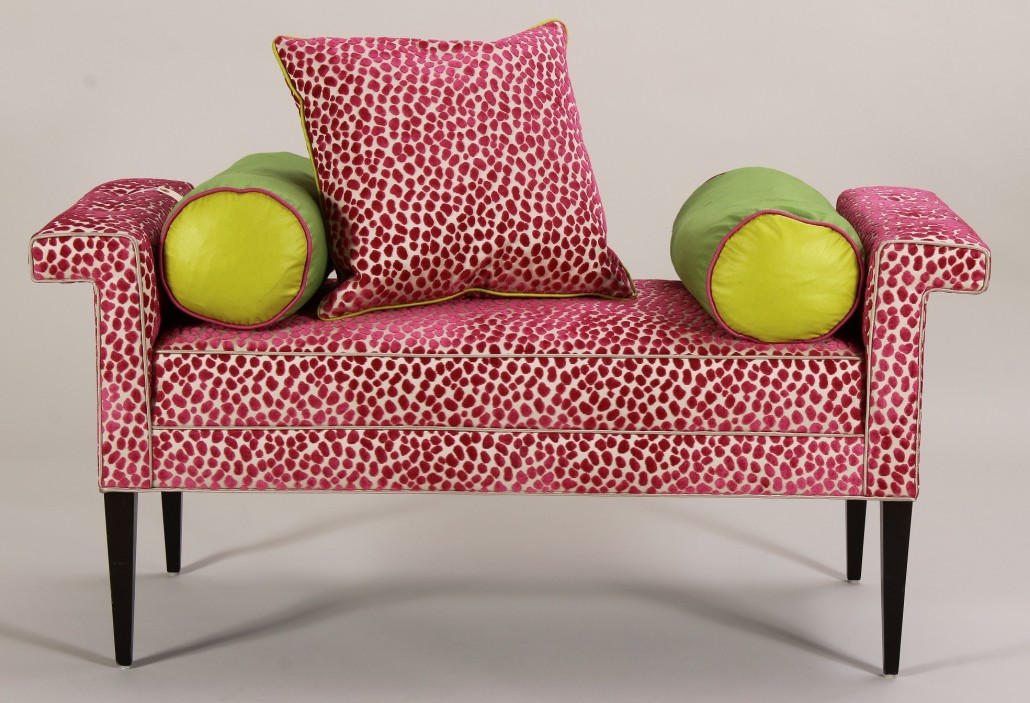 Animal themes so popular during the Victorian era blended seamlessly to add whimsy to Joan Rivers’ room schemes. Auction choices include a pair of porcelain lamps decorated with monkeys, $200-$400; a pair of Chelsea House Neoclassical-style urns with rams’ heads and garlands, $400-$600; and a pair of porcelain and brass parrot-form candlesticks, $200-$300. 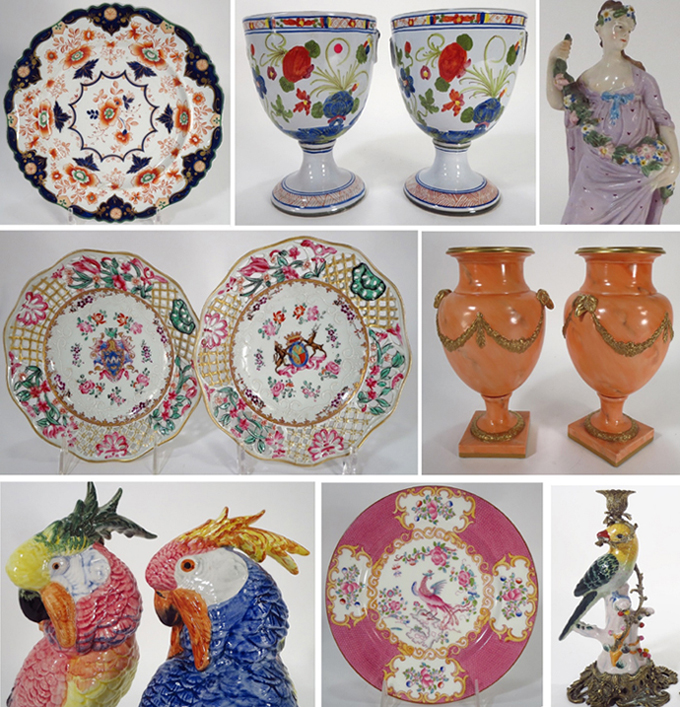 Beautiful European porcelains from the residences of Joan Rivers

One of the auction items that came from Rivers’ elegant Fifth Avenue apartment in New York is a 19th-century (or earlier) cast-lead garden sculpture of the Angel Gabriel with his horn. The life-size figure on a marble plinth oversaw Central Park from its lofty perch on the apartment’s terrace and is recognizable from many magazine photos of the Rivers residence. It is estimated at $1,500-$2,500. 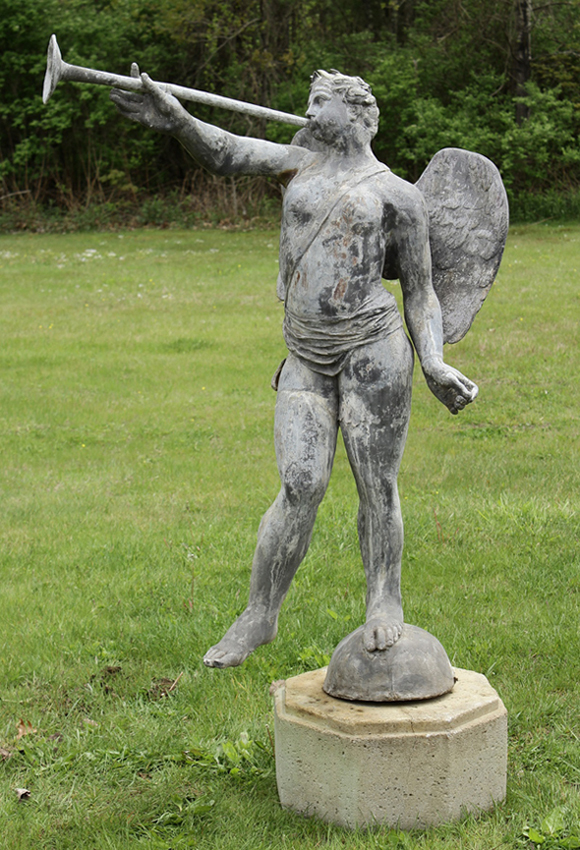 Dinner at Joan’s house was always a stylish affair, with porcelain dinnerware, sparkling crystal and fine silver. Many dinner services will be auctioned, including a Royal Copenhagen set in the Flora Danica pattern, $1,000-$1,500; and antique Copeland Spode, $400-$600. A pair of .800 silver table trees by Ludwig Neresheimer (active from 1890), Hanau, Germany, weigh a combined 76 ozt and have an auction estimate of $800-$1,200.

Arguably, no American designer did more to bring sophistication and superior workmanship to costume jewelry than Joan Rivers. Her creations, now considered classics, allowed every woman the opportunity to accessorize effortlessly, knowing each piece was beautifully made and the height of fashion. The July 20-21 auction will open Joan’s personal jewelry box, containing chains, necklaces, beads, brooches, and the sensational enameled and jeweled bangles that were a staple of her collection. The jewelry items will be grouped in lots and offered with attractive estimates. 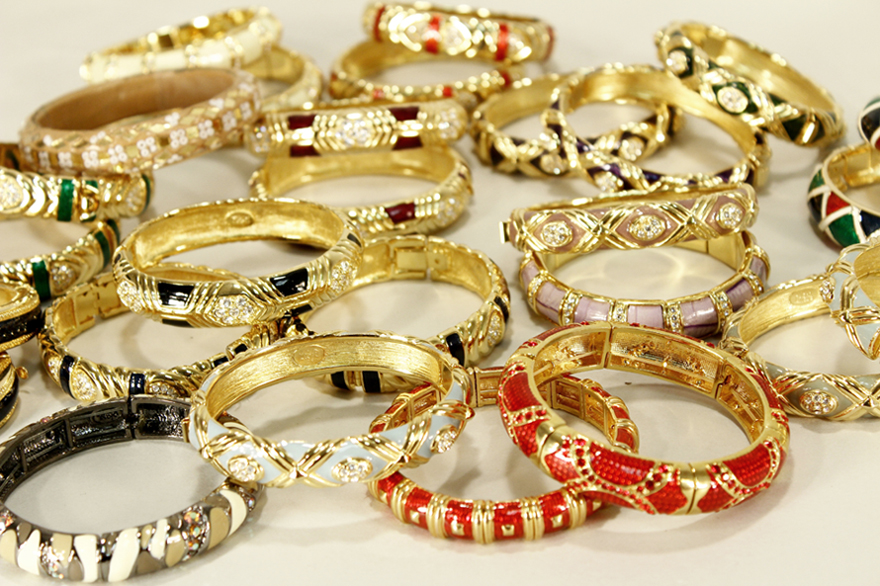 Group lot of Joan Rivers’ bracelets from her personal collection

As boxes have continued to arrive at the gallery, Nick Thorn, president of Litchfield County Auctions, remarked, “In addition to fine porcelain and glass, we’re pulling out lots of fun items, from gold opera glasses and Chanel earrings to bold designer sunglasses.”

A neighborly atmosphere is expected at the live auction. “Joan had many friends in the community,” Thorn said. “One of her close friends, who now lives in Connecticut, acted as an advisor to the estate. Because we have conducted numerous estate auctions in conjunction with Christie’s over the years, it was felt that we were the natural choice to sell Joan’s additional property. We’re honored to have a role in carrying out the wishes of Joan Rivers and her estate.”

Litchfield County Auctions’ Wed./Thurs. July 20-21, 2016 auction will start at 10 a.m. Eastern Time on both days. All forms of bidding will be available, including absentee or live via the Internet through www.LiveAuctioneers.com. For additional information on any item in the auction, call 860-567-4661 or email sales@litchfieldcountyauctions.com.

View the fully illustrated catalog and sign up to bid absentee or live online at www.LiveAuctioneers.com.

Majority of lots in Joan Rivers auction sold through LiveAuctioneers