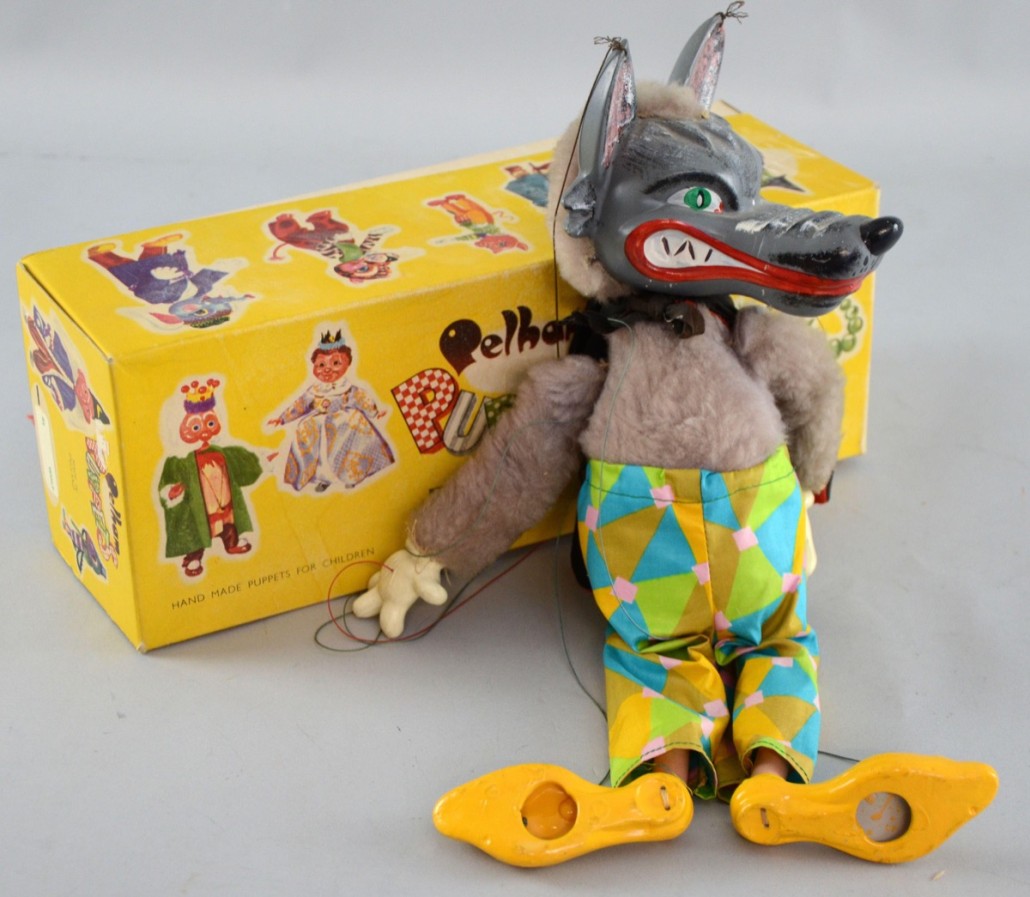 A wolf puppet from Pelham’s 1963 range. He wears trousers and a cape and has a saleroom value of £30-£50. Photo Ewbank’s auctioneers

LONDON – No one really knows when puppetry began. Cave dwellers probably entertained themselves by making shapes from shadows cast on the walls by the light of their fires, while the ancient Greeks had a word for it, which meant “drawn by strings.”

The crowd of youngsters we watched screaming enthusiastically at Mr. Punch on the pier the other day neither knew nor cared and it was heartening that in this digital age traditional pastimes continue to enthral.
I was enthralled as a child too. Sooty and Sweep glove puppets found their way into my toy box first, followed by a series of proper, string-driven puppets made by a company once called appropriately Wonky Toys, and later Pelham, after its founder, Robert “Bob” Pelham (1919-1980).

A cardboard box wrapped in brown paper and string currently sitting on a top garage shelf is full of them. It last saw the light of day in 1981, two house moves ago.

Sadly, Pelham’s “Fish Footman” (below) is not among them. If it was, we’d be rich. 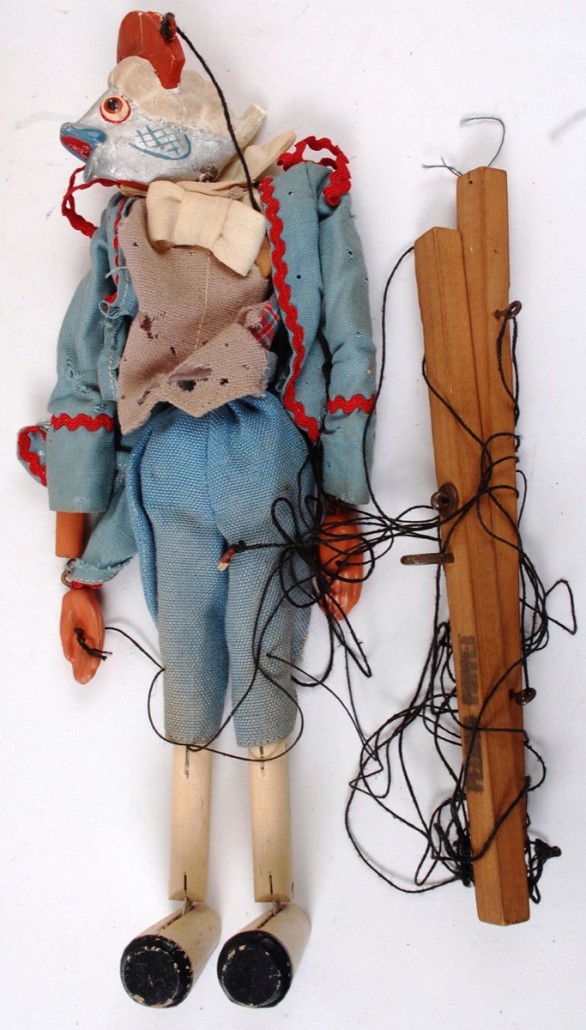 According to a leading antiques trade publication, a Fish Footman puppet has just set a new world auction record of £580. As rare as rocking horse do-do, it is only the second to come up for auction. In February 2013, a mint-condition Fish Footman, but lacking its all-important box, sold in a London saleroom for £450.

Lewis Carroll aficionados will recall that the Fish is a minor character in Alice’s Adventures in Wonderland, written in 1865. Illustrated copies show him delivering a letter from the Queen of Hearts to the Duchess’s Frog Footman, inviting her to a game of croquet.

Pelham produced an entire series of Alice in Wonderland puppets, called the SE range, which went on sale in 1950, three years after Bob Pelham started his business in a small workshop in Marlborough, Wiltshire. Naturally, Alice was the most popular and easiest to find today, changing hands today for generally less than £30.

The Fish and Frog characters were least popular, partly perhaps because they were not particularly attractive. Factory records reveal that in 1954, for example, just two Fish Footman were sold that year. 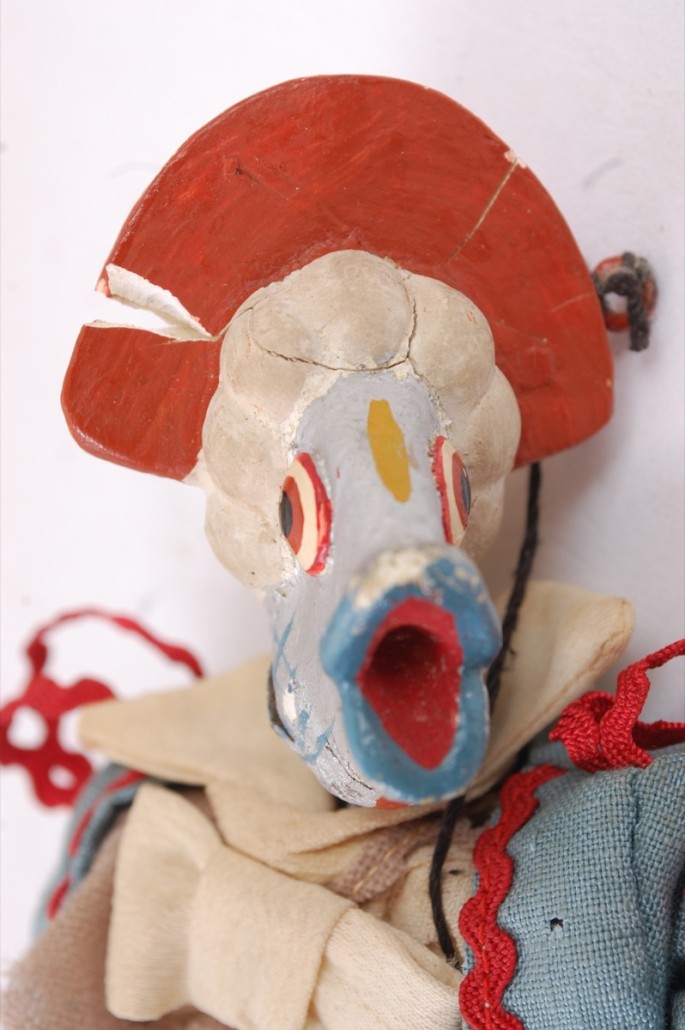 The example that turned up at East Bristol Auctions in Hanham, a village east of the city, had been found in the loft of a house in Cardiff. Its felt jacket and waistcoat was somewhat moth-eaten and its plaster head cracked and incomplete.

However, importantly, it came with the original cardboard box in which it was sold originally, albeit it crumpled and water-damaged, but this means so much to collectors. The saleroom’s specialist, Andrew Stowe believed it could be the only one in existence with its box still surviving. 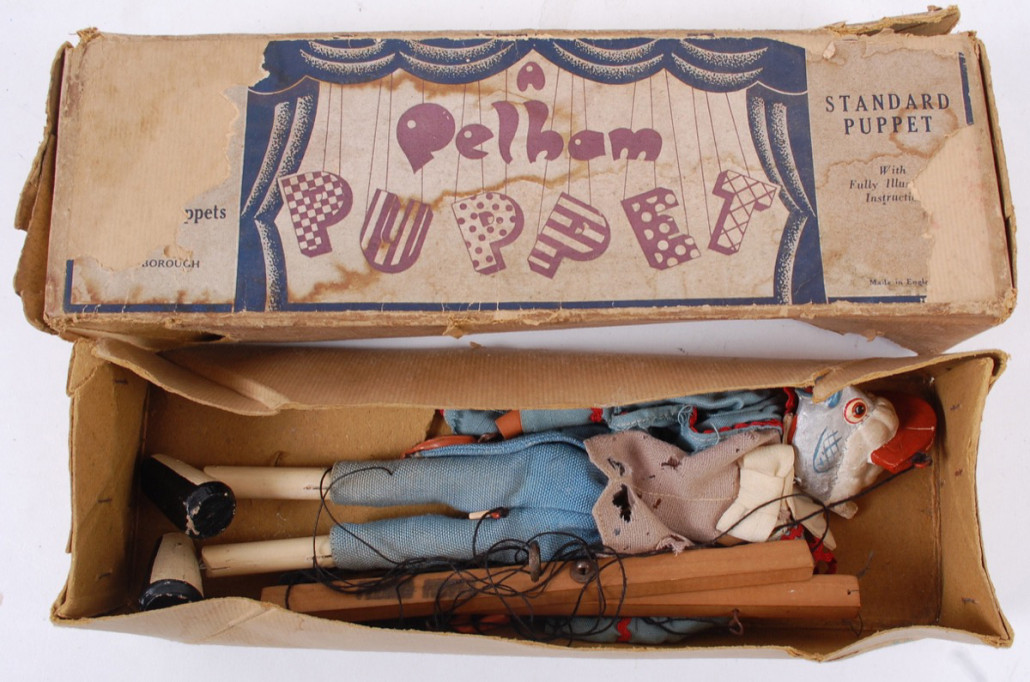 The box might well be battered and faded, but having it makes all the difference to buyers. Photo East Bristol Auctions

It was purchased by a private collector with a passion for the playthings. He already owns more than 700 others, which gives an idea of the huge range of Pelhams waiting to be found. Starting a collection need not be expensive. Later, more common examples are readily available in the £10-£20 price range.

However, those prices are set to be challenged in a series of three auctions starting Sept. 16 at Bamford’s Derby saleroom to disperse the Kay Casey Collection of more than 1,300 lots of Pelham puppets – one of the biggest the UK has ever seen – following her death last year.

In addition to every puppet in the Alice in Wonderland series, the collection includes what the auctioneers claim is a unique run of the 1963 Animal Range, notably the Tortoise, of which only six examples are know to exist. Further sales will be held at Bamford’s on Nov. 25 and Feb. 3.

‘The Skeleton,’ a Pelham Puppet with a saleroom estimate of £30-£50. Photo Ewbank’s auctioneers

Bob Pelham, a former architect, founded his business in 1947, calling it Wonky Toys Ltd., a hangover from his days as an officer in the armed forces when he made small wooden donkeys to give to children. He was known as the “wonky donkey officer” thereafter. His first products were simple articulated wooden toys with joints held together with string.

After seeking advice from the team behind Muffin the Mule, created in 1933 by Punch and Judy puppet maker Fred Tickner, and later the star of the BBC children’s TV series, Bob hit on the idea of making marionettes simple enough to be manipulated by children.

Prototypes were made using scrap material begged from his parents and friends before his production run of a girl puppet called Chloe. Despite initial indifference from toy retailers, he managed to persuade Hamleys to give him counter space in their Regent Street toyshop and a year after its formation, the company was renamed Pelham Puppets.

Growth followed. Soon puppets with such names as Sandy McBoozle and Wonky Cowboy were being exported to more than 40 countries, sales being boosted by children who bought them being invited to join the “exclusive” Pelpup Club, which had its own newsletter. 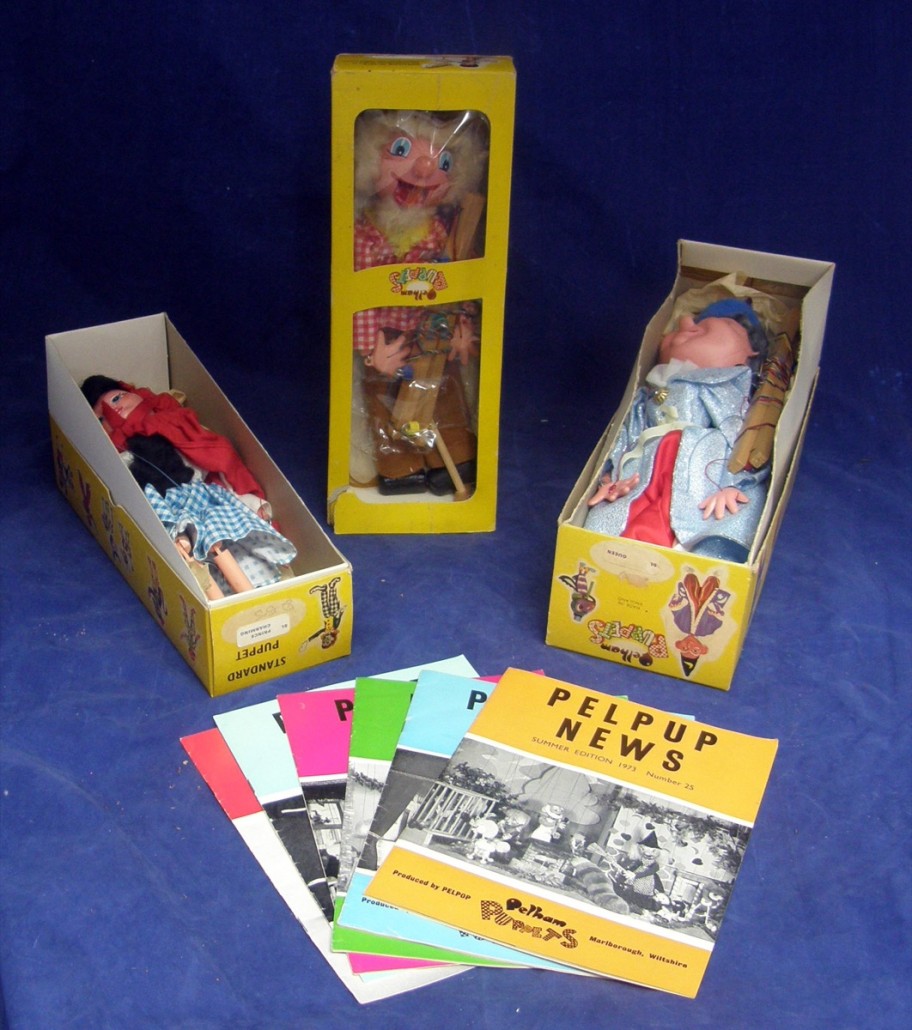 A further boost came in 1953, when Pelham won the rights to make puppets based on Disney characters, notably Pinocchio, the puppet who dreamed of being a boy. It became the most popular of all the hundreds of characters produced.

From a small two-room workshop, the business moved several times to larger and larger premises in Marlborough until Pelham was able to purchase a three-story factory on the banks of the River Kennet, subsequently destroyed by a devastating fire in 1961 in which all stocks were lost. 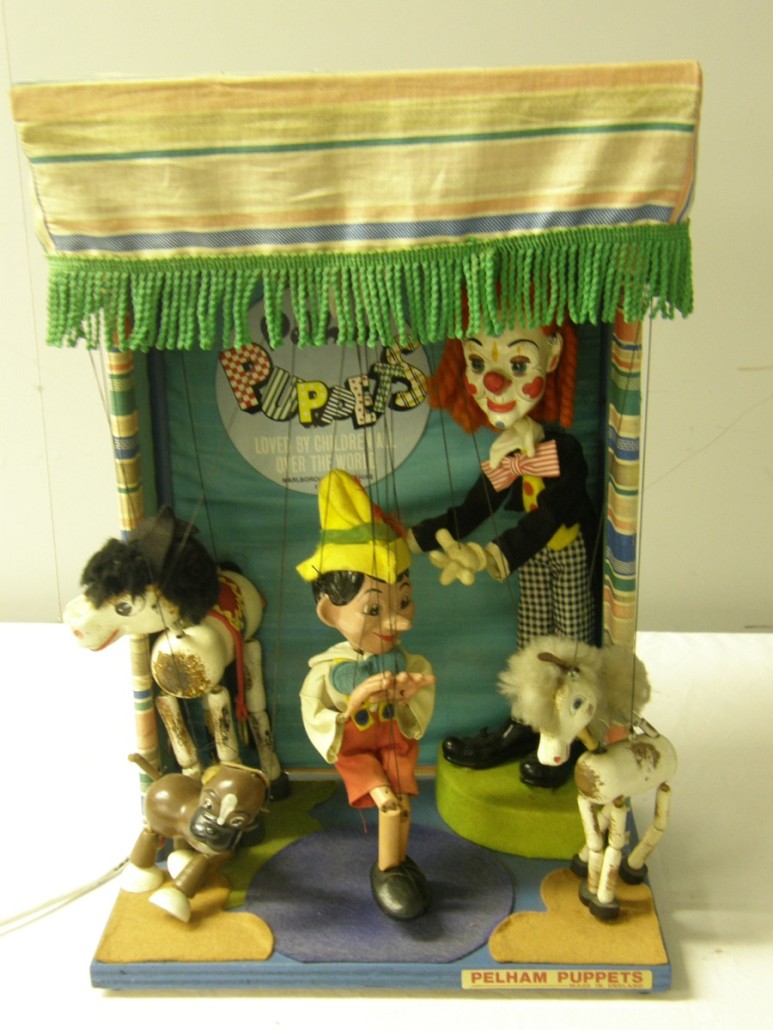 A battery-driven toyshop window animated display, the sign on the backdrop reading ‘Pelham Puppets loved by children all over the world, Marlborough, Wiltshire, England.’ The five puppets include Clown, Pinocchio, Horse, Dog and Pony. It sold for £160. Photo Ewbank’s auctioneers

A new factory rose for the ashes on the same site and in 1972, Pelham Puppets was named the Toy of the Year. Success came at a price, however, and Bob began to feel the pressure of maintaining the momentum.

Thousands of each character were being produced every year to meet demand – in 1979, for example, every puppet made in the first half of the financial year was exported to the United States.

His wife, Ann, continued the business after Bob died in 1980, but it was sold to new owners in 1986. They relocated to a new site in Wiltshire and it was sold again in the early 1990s, production moving to a factory in Gloucestershire before going into liquidation in 1993. A former employee revived the enterprise in 2008 and continues today.

As ever, condition and rarity govern prices. Puppets with boxes and strings still intact are more valuable than those without. Prices begin in the low double figures for most common, or more recent models but, as can be seen, rise dramatically for scarcer examples.

In a dispersal sale of a large private collection in 2012-13, Yorkshire auctioneers Hartley’s achieved four figure sums for groups of three puppets from the 1940s.

Top prices for individual puppets then included £520 and £460 respectively for boxed figures of Carrot Top from a series based on the 1952 film Lilli and the 1950s comic strip character Lettice Leafe.
___