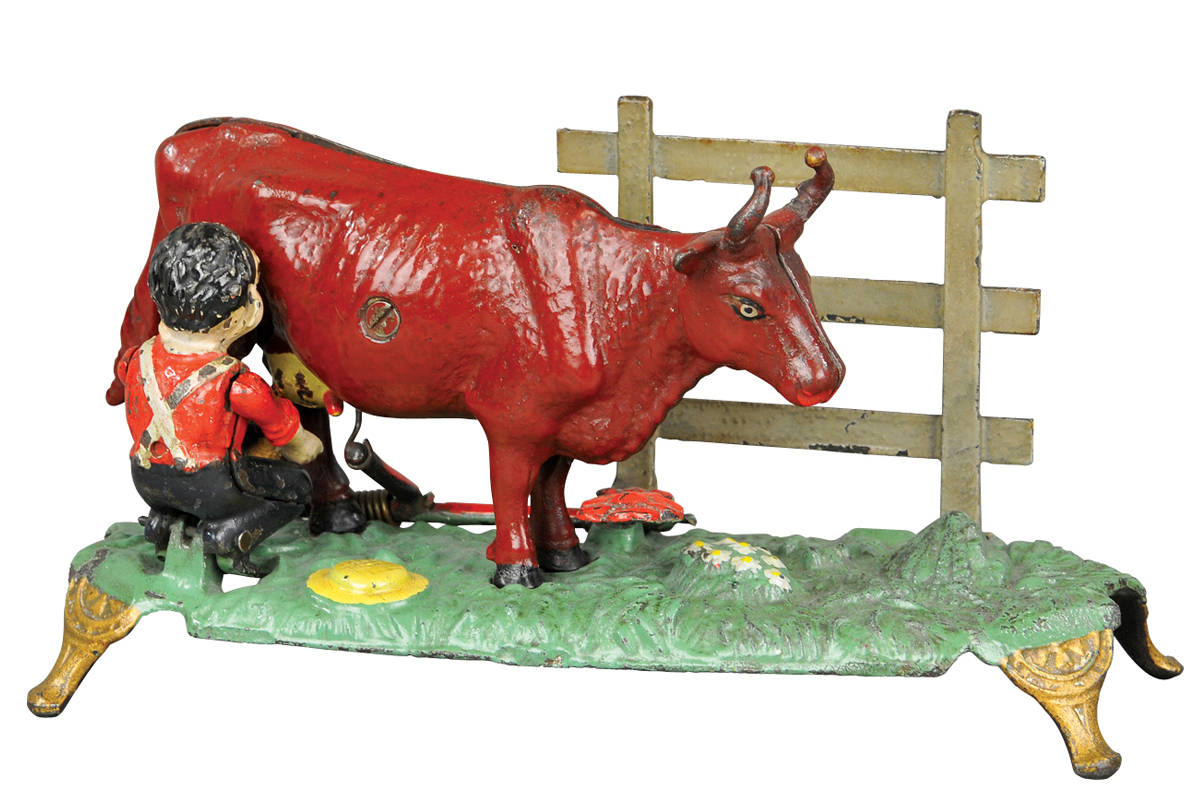 VINELAND, N.J. – In California, the term “private reserve” refers to wine of particularly high quality – often a type that has aged over a long period of time. It also describes to a ‘T’ the Clive Devenish bank collection, whose contents have “aged” serenely for decades in their owner’s various California homes. Undoubtedly one of the all-time great bank collections, it also stands out as being one of the least publicized, known to few in the hobby. That will change on Saturday, October 3rd, when Bertoia’s presents at auction Part I of the Clive Devenish collection of mechanical, still, tin and spelter banks. Absentee and Internet live bidding will be available through LiveAuctioneers.

“Clive’s banks are going to astound collectors, not only because of their rarity and fabulous condition but also their provenance,” said Bertoia Auctions associate Rich Bertoia. “Clive was able to buy banks from the heirs of several legendary early collectors, including Ferdinand Wieder, Leon Cameto and Hall Henry. He also has banks that were formerly in the Stan Sax, Edwin Mosler, Bill Norman, and Stephen and Marilyn Steckbeck collections.” Bertoia said some of the banks were initially added to collections in the 1930s and only changed hands twice over the next 85 years, explaining their exceptionally fresh condition.

Apportioned into 175 lots, Bertoia’s single-owner sale of the Devenish collection will open with mechanical banks, which comprise 85 to 90% of the session’s entries. A premier mechanical is the Kyser & Rex Roller Skating Bank, ex Steckbeck collection, which Bertoia describes as “a gem.” It is expected to sell for $150,000-$175,000. 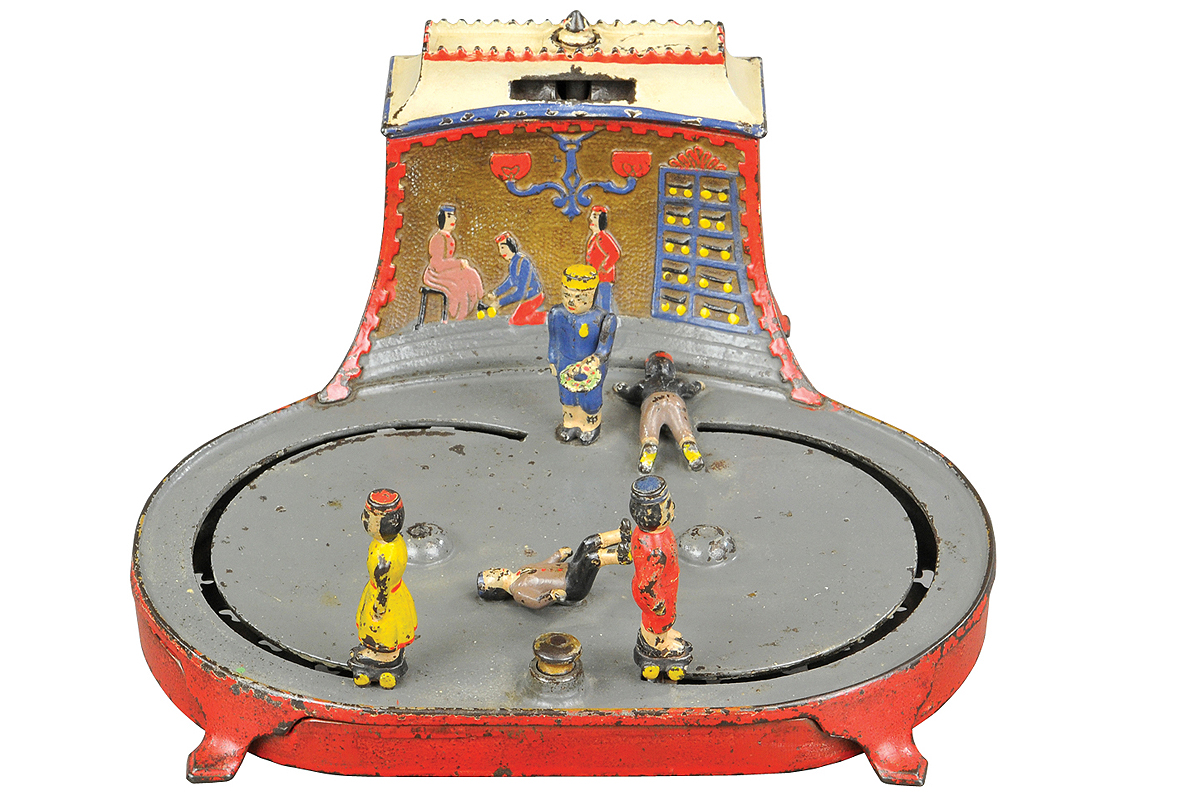 Several banks are accompanied by their coveted original boxes: a Chief Big Moon (shown below), a Mason bank, a Shepard red-version Speaking Dog, and a yellow, flanged-base version of a Horse Race bank, ex Bill Norman collection. “We took a few of the banks to the mechanical bank collectors convention, and there were quite a few double-takes,” Bertoia said. “The adjective we heard most often was ‘stunning.’” 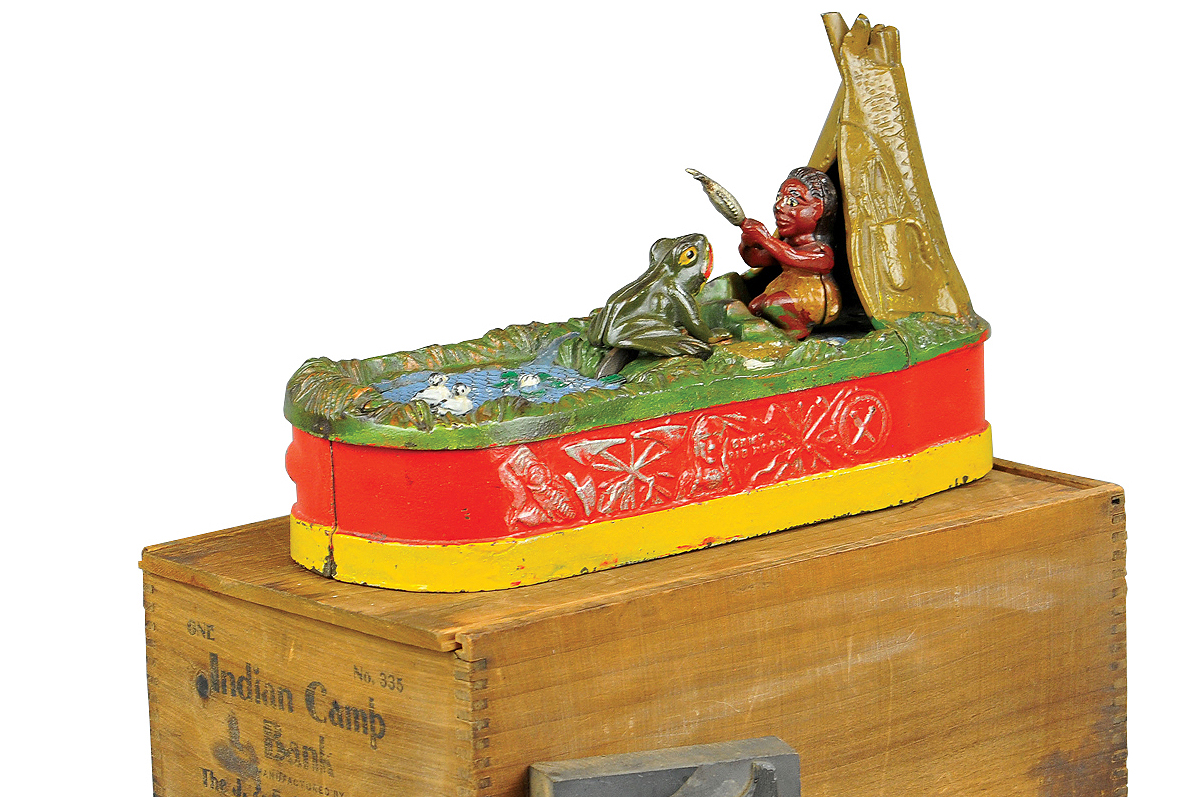 Numerous other banks fall into the pristine to near-mint category, among them a Springing Cat (shown below) described by Bertoia as the best one he has ever seen, and exquisite examples of Leap Frog, Bread Winners (also shown below), Picture Gallery and John Bull banks. A circa-1888 Milking Cow bank (shown at top) also boasts near-mint condition. 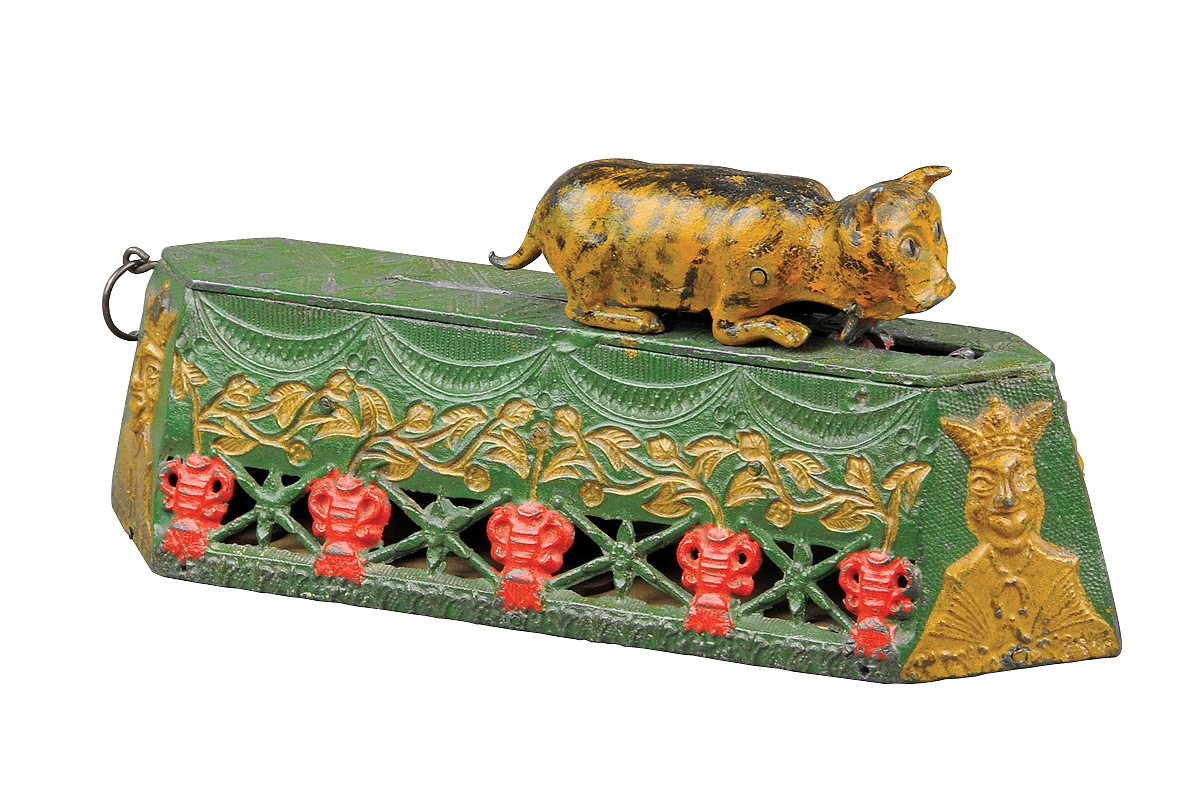 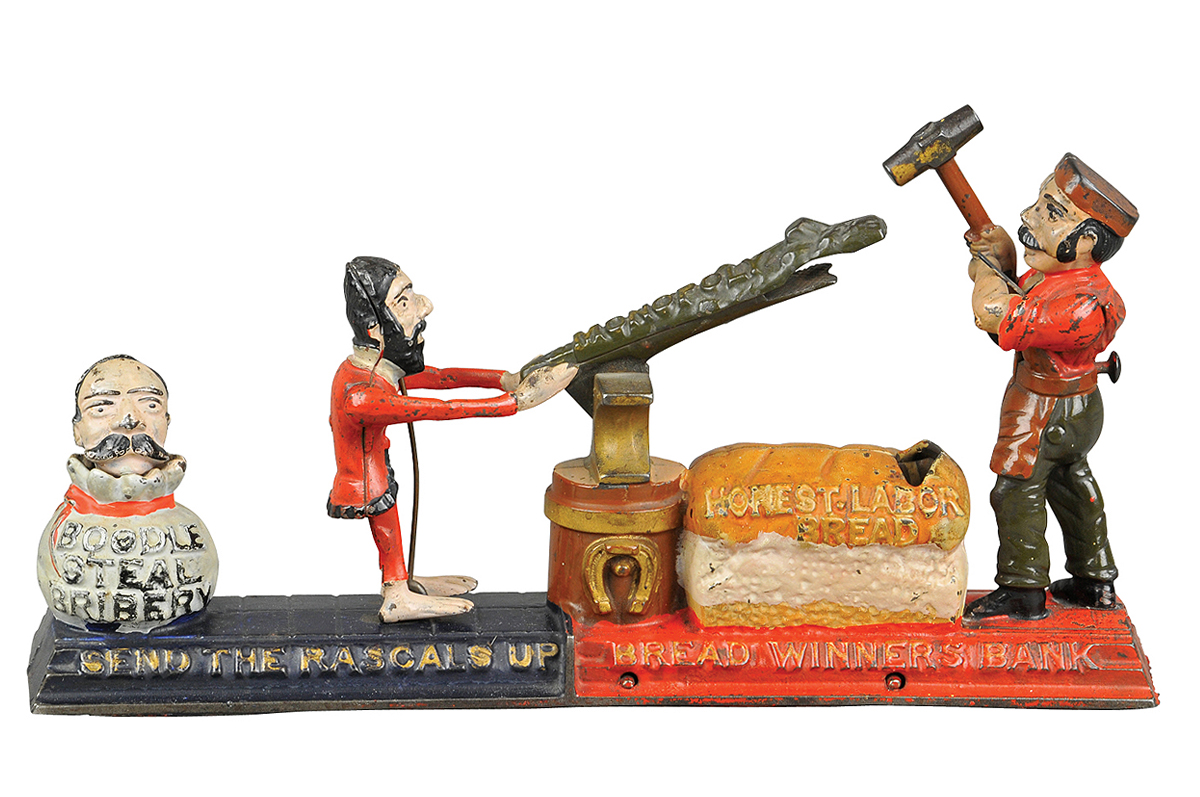 “Collections of this magnitude are much easier to vet because there are far fewer problems. In the Devenish collection, even the more common banks become ‘rare’ because of their age-defying condition,” Bertoia said. “Those who know Clive have always thought of him as a well-respected, well-liked dealer. Few realized he had a private collection, much less a collection of such incredible quality, but over the years he methodically kept the banks he thought were great and just kept on upgrading.”

Many of the still banks in the collection came to Devenish through a legendary bank expert, the late Donal Markey. This fact, in itself, speaks volumes about the banks’ condition. There are both large and small painted Camels, as well as several Mammies and a Mulligan Cop, all in immaculate condition. The Battleship Oregon is brilliant white and gorgeous, in contrast to some other Battleship banks that have incurred metal breakage. Another top entry is the Mascot bank (shown below), which depicts a baseball player standing on a baseball. The player’s socks still display original red paint, which is quite unusual, Bertoia said. 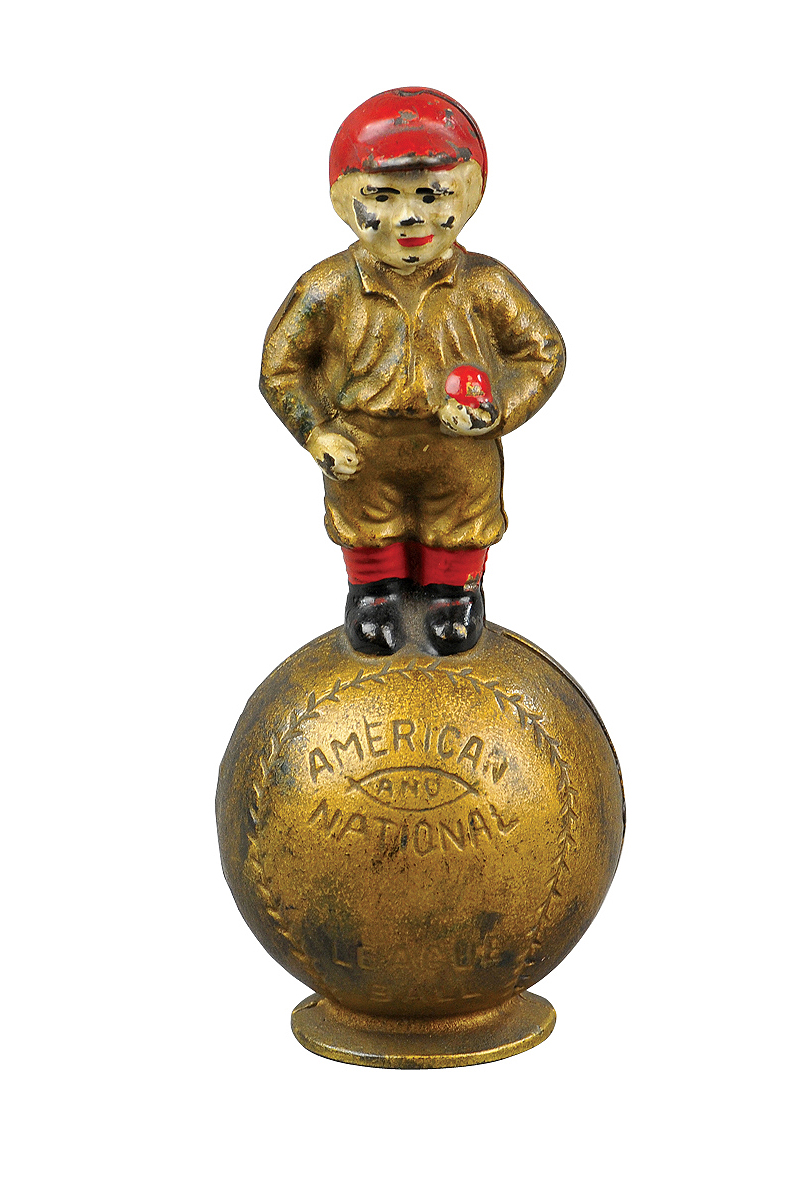 The selection of German spelter banks – a fast-rising auction category over the last few years – includes a Standing Bear, a Rabbit with long ears (shown below), and several dogs in different poses. Each was a skillfully hand-painted production and would make a prized visual asset to any collection. 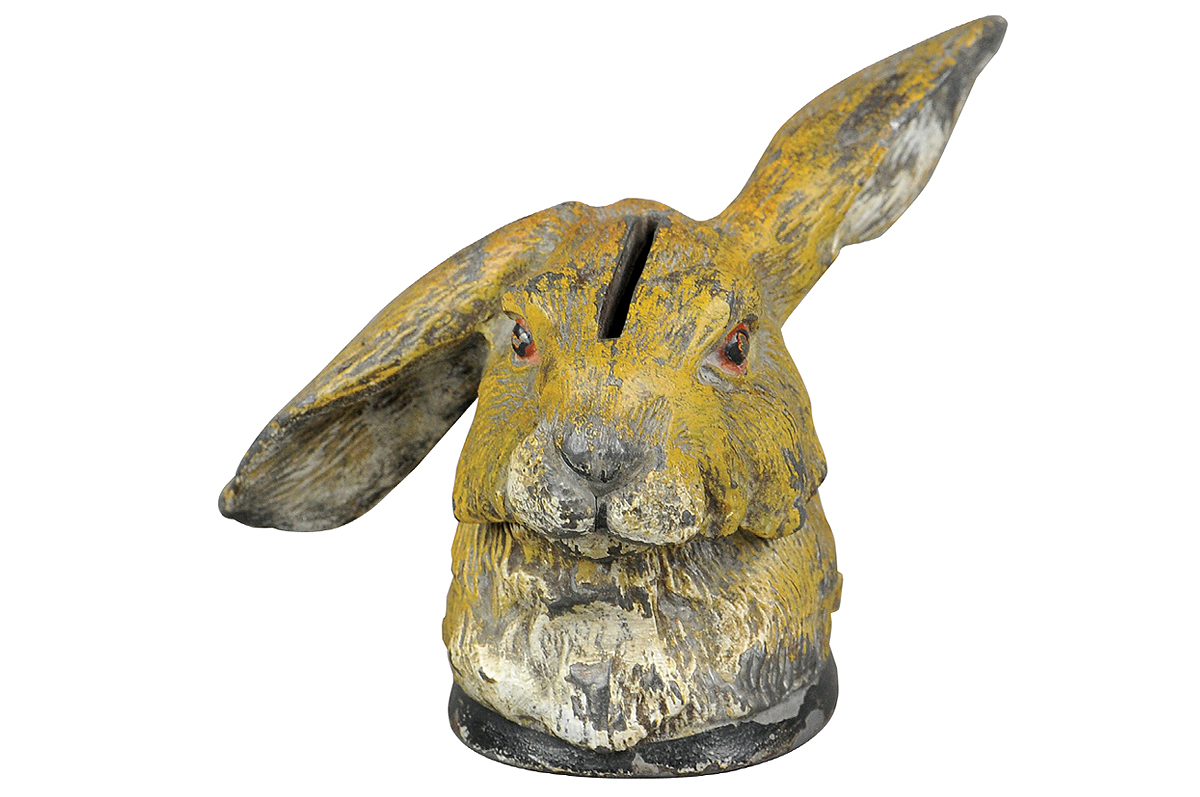 There are many amusing lithographed tin banks, including semi-mechanical vending types. “It’s one of the best all-around groupings of tin banks I’ve ever seen,” Bertoia observed. Leading the assemblage are: Royal “Trick” Elephant (shown below), Clown and Dog, Clever Dick, and Saluting Sailor, all in superb condition. Vending or semi-mechanicals of note include British-made rarities known as “African,” “Lion” and “Clown.” 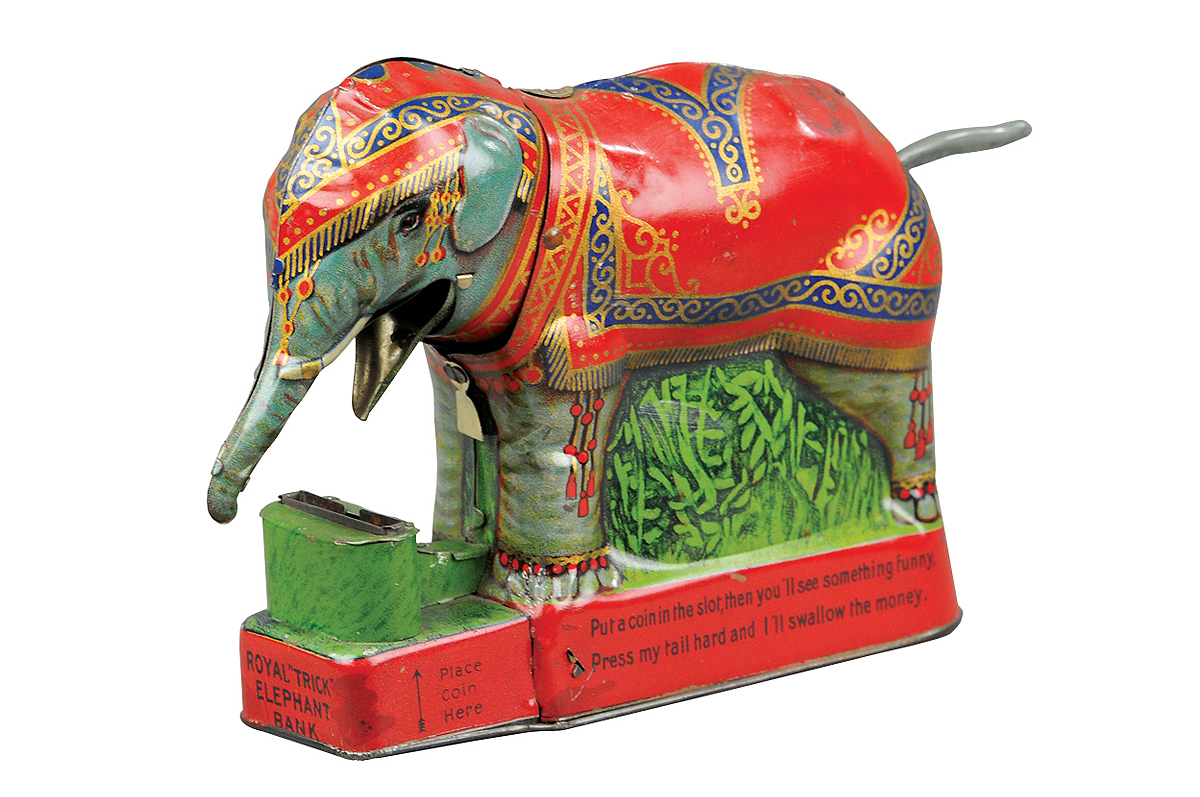 Bertoia’s will present the Devenish collection in two separate sales, with the second auction slated for spring 2016. “We felt that because of the collection’s unusually high quality and value, it would be more responsible to offer the collection in two parts. It’s a lot for the market to absorb at one time. This way collectors can take their time, plan ahead, and have another wonderful auction event to attend next year,” said Jeanne Bertoia, owner of Bertoia Auctions.

The auction of the Clive Devenish antique bank collection, Part I, will be held on Saturday, Oct. 3, 2015, with absentee and Internet live bidding through LiveAuctioneers. For additional information on any item in the sale, contact Bertoia Auctions, call 856-692-1881 or email toys@bertoiaauctions.com.

View the fully illustrated catalog and register to bid absentee or live via the Internet as the sale is taking place by logging on to www.LiveAuctioneers.com.